Great Bay Road is a mile long unpaved road on the western side of Great Pond.  It’s one of the jewels of the Maravista neighborhood used for walking and biking by many all year long.  It is a public way and runs along the top of an eroding 10-20’ high coastal bluff.  Northeast winds eat at the bluff and over the past 10 years many areas of Great Bay Road have lost their protective greenspace between the road and pond.  More than half of Great Bay Road has been closed to vehicular traffic due to erosion

Roughly a year ago an area between Boston and Brockton Streets where some of the worst erosion had occurred was reengineered as an ecologically friendly erosion control barrier with town approval. This work was fully funded and paid for by private homeowners.  The work was done without adding stone revetments, and instead used natural fiber tubes, anchored to the base of the bluff to absorb and dissipate wave action.

Invasive plants like bittersweet vines were removed from the bluff and it is being reseeded and replanted with native grasses and bushes to better hold the top of the bluff in place. 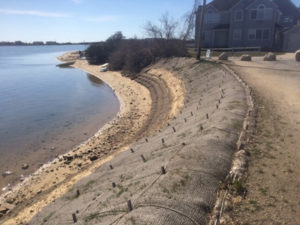 Recently the Board of Selectman were presented with a proposal for the same approach a half mile up the pond near Toledo Street.   The proposal was for the same type of ecologically friendly passive barrier stretching along the cove between Iroquois and Toledo Street to protect vulnerable parts of Great Bay Road, also funded by private homeowners under town approval. 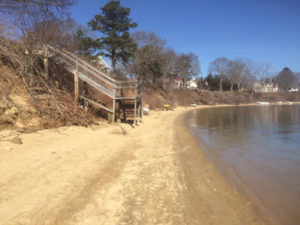 The Board of Selectman approved the proposal going before the Conservation committee when complete and observed that while the town does own Great Bay Road and realizes it is one of many coastal erosion problems in Falmouth, they are going to observe this experiment as well as others to get a better sense of some of the strategies to combat erosion due to sea level rise over time.

The slippery slope in all of this is illustrated by the picture below of one of the worst areas of erosion, just a few hundred feet from where the Toledo St. erosion control system would be installed.  This area at the end of Reynolds Street was eaten away by an improperly installed town storm drain and is only a few feet from Great Bay Road. 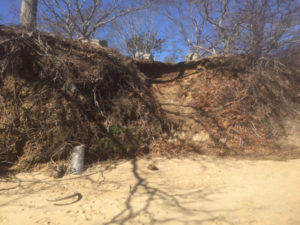 FHMNA applauds the erosion-control efforts by the local property owners.  With 68 miles of coastline to protect, we look forward to a comprehensive erosion control plan for the entire town.