FHMNA is pleased to present a continuing series of postings regarding our neighbors’ personal experiences in connecting their properties to the Town’s sewer system. New additions will be added at the top of the list.  See the earliest posting for comments with photos.

All information is directly quoted from emails received from the neighbors, whose names and contact information has now been deleted for privacy, now that the project has been completed.  If you wish to contact an owner regarding specific comments, please email info@fhmna.org.

Also see articles since 2012 and “Links” (under Pages, left) for other helpful information.

We hope that these details are useful to you.

Five Stars for “Connect All” (Northstar Construction). Could not have been more pleased with the crew John and Dana put together to complete our installation. Ours was somewhat complex with a run of 60 feet or more and several irrigation lines that needed to be cut and mended.

Additionally, as it turned out, the septic tank was finally located under a portion of our patio which had to be ripped up and repaired. In particular, Clipper Landscaping did a superior job with the excavation and re-establishing the lawn and shrubs; very friendly and professional.

Installation in two days and repairs completed to our satisfaction.

The best part, pricing well under the competition.

Our sewer connection and grinder pump were installed on June 21st. We, along with many homes on our street, contracted with Connect All (Northstar Construction).

John, Dana and their entire team of professionals did an amazing job from start to finish.   We are very pleased and would recommend them.

I had my connection made on Friday April 7. We used A&K Septic and they had Fender Electric and Bennett Plumbing with them.

Good price and smooth installation by friendly people who knew what they were doing.

Our grinder pump sewer connection was done by Connect All/Sewer Connect. We had many estimates and opinions on how to complete our hook up. We are so very happy to have chosen John DeSangro ( also of Northstar Construction).

Ours was complicated since it went across a circular stone driveway, through plantings in the front and all along the narrow side which was bordered by the house and a fence plus many electrical wires, gas line, etc. The entire wood side wall and floor of the outside shower was removed plus 1/3 of the brick back yard patio for access to the Title 5 tank and plumbing connections.

John did everything exactly as he said he and his team would – at one point 12 of them were all working at the same time. John kept us informed throughout and was always on schedule. The main work was done in 2 days including the town inspections. 3 days later, the landscaping was 100% complete – the 2 days in between were the December blizzard!

Part of John’s team, Clipper Landscaping, were amazing – the shower was all new wood, the salvageable plants were replanted, new mulch was everywhere, the patio brick was redone perfectly and the stone driveway and front walkway were clean.

John and his entire team were professional perfectionists throughout the entire process – a huge plus to have with us in Falmouth. Please drive by our house to see his work 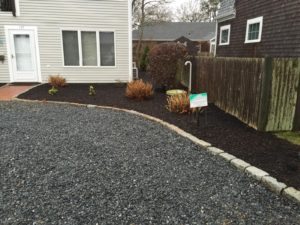 We got multiple quotes for a difficult installation as our connection is in the back of the house and involved a great deal of hand digging to go around the bulkhead, outdoor shower and they had to pull up stones walk and work around lines to the generator, etc.  The space was too small to use a machine in the back yard so the old tank had to be filled by hand as well.

We used Mr Digs and they had the lowest price by some 20%.  The job was done exactly as they said it would, and they did a beautiful job of restoring the lawn, walk, fence, etc. back to the original condition.  I really can’t say enough good things about them and the job they did and the timeliness in which it was done.  We had to put a pump/grinder in and all went well.

Hope that is helpful and feel free to contact us if you have a question.

Our house is at the S.W. corner of Worcester Ct and Jericho Path; 46 Worcester Ct. We did not have to reroute plumbing within the house. We attached to the piping coming from the house near our back door, then the trench ran behind our garage, across a side lot to the Jericho Path connection.

Needless to say we chose the $2995 quote with Falmouth Energy for the plumbing who utilized All Cape Construction for the excavation. We were very pleased with the installation and they even added a portion of work which was not even included in the original quote. They coordinated the schedule so that we were still in Falmouth and had not yet returned to our winter home. Since our home is 76 years old, they had two issues they had to resolve with the plumbing inspector which was handled efficiently and did not delay the completion.

We were glad we were still in Falmouth in order to answer some questions such as which bathroom was original and which was added later. Fortunately the pipe material coming from the house was acceptable even though more modern homes use different materials. If any of the piping was Orangeburg, it sounds like it would have been a problem and required a much larger scope of work. Based upon our installation, it would be expedient for a home owner with an older home, say pre 1960, to be available for problem resolution decisions.

We were generally satisfied with the process.  We attended meetings and paid attention to notices from the town.  Our corner lot and the location of the septic tank complicated the process.  The entire backyard was dug up, but it needed to be done.  We planned for it at the end of the summer to take advantage of the grass growing season in the fall, which appears to be working.  The contractor, Mr Diggs, was very good.  He kept us informed and performed extra work that we needed, without a problem.

I expected some sort of signoff from the town indicating the work was correctly installed and we were authorized to discharge into the system, or some sort of formal acknowledgement of service.  None was provided.  I have asked the town office and did not get a satisfactory answer.  I will continue to pursue.  It seems reasonable to me to have a record of the hookup, but perhaps I am expecting too much.

It has been a little over a month, and everything seems to be fine.  The experience was pretty much what we expected.  A headache but a necessary one.

I would recommend Mr Diggs.  I won’t comment on price, other than to say it seemed fair.  We had multiple runs of over 50’, so the price is higher than what would be typical for a front yard septic system.

Our gravity sewer hookup was done on August 22, 2016. This was probably one of the most difficult gravity hook ups due to the depth and length of the line. Approximately 110 feet long and depth starting at 5 feet 6 inches and ending at the street lateral at 7 feet deep. This was due to the lower level bathroom in our house. The Title Five tank put in about 12 years ago had to be pumped, bottom holed and filled. Bottom of the 1500 gallon tank was 12 feet below grade. Work began at 9 am and we were flowing to the town main at 7 pm. The following day trench was backfilled and restoration work completed except for reseeding which I did myself on the third day. The trench was as much as 7 feet wide and I estimate 150 cubic  yards was removed and replaced. The dirt piles were very large.

Very pleased with the cost and contractors. Panton plumbing – Francis Smith, and Dalpe Excavation, Mark Dalpe. Other quotes were as much as 60% higher. Having spent a great deal of time following the town process and observing other contractors at work I strongly feel this was the best team for our project. Several other contractors are also doing very good work.

People should be aware of safety issues as I have observed some excavators leaving trenches open overnight with no safety fencing. This can present serious liability issues for  homeowners.

In talking to many others who have had their work done or have received multiple quotes I find that most grinder pump systems have cost between 4 and 5 thousand dollars, gravity systems in the range of 5 to 8 thousand dollars. The grinder pump lines only require  a narrow trench and typically less depth. I would estimate about 40 to 50 systems are now hooked up. I have observed as many as 5 being worked on in one day. I have seen two grinder pump systems using horizontal drilling for the sewer line resulting in much less excavation and damage to the properties.

My installation involved a grinder pump.  I received four quotes ranging from $4,700 to $10,990  .I chose A & K Site Septic based on my comfort level with one of the owners. They completed the job in one day for $4700. I was completely satisfied with their approach, execution and respect for my property. I would recommend them.”

I chose to re-rout plumbing in the crawl space from the rear of house exit (back yard) to new front of the house exit.  Trench excavation was reduced to 15 feet to the lateral.  Paid more for the plumber for the re-routing, but less to excavator because of the reduced length of trench required.  Reduced the re-landscaping required as well.

My electrical work was straightforward. I had enough room in the existing electrical panel to add the pump’s circuit breaker.  If you need a new panel and/or your panel is on the second floor electrical price will be higher.

All my work was coordinated by the excavator. All trade professionals came to my property for accurate estimates (A&K Excavators, Bennett Plumbing & Fender Electrical were my contractors).

Get 3 quotes and ask for a line item breakdown if costs are off by greater than 10%.

No noise or odor issues after 5 full days of operation.” 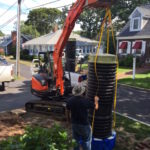 grinder pump about to be hoisted 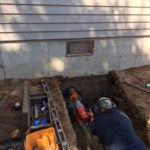 coring hole in foundation for re-routed plumbing to exit 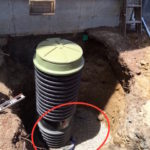 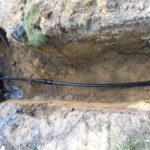 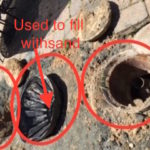 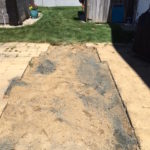 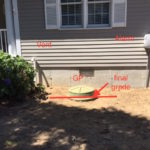